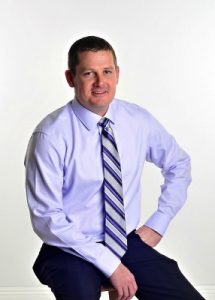 Dr. Cody Hughes is originally from Mesquite, Nevada. He completed dental school at University of Nevada, Las Vegas School of Dental Medicine and did a 2-year residency in Pediatric Dentistry at Riley’s Children’s Hospital in Indianapolis, Indiana, where he worked with many special needs patients including kids with autism, Down syndrome, cerebral palsy and other medical conditions.

In conjunction with his residency, he also received an MSD from Indiana School of Dentistry with a minor in child psychology before completing his board certification with the American Board of Pediatric Dentistry; he obtained diplomate status in 2011.

His greatest satisfaction comes in spending time with his wife, Amy, and their five children. He loves to coach his kids baseball and softball teams, go hiking and camping, and travel.

Fun fact: Dr. Cody has lived on 3 different continents for extended periods of time (North America, Europe and Africa). Ask him about his experiences next time you’re in the office!

Dr. Hughes is a member of:

Dr. Jeff Higbee was born in Utah and raised in the small town of Cedar City. He attended Southern Utah University, where he earned his Bachelor of Science degree in biology. His dental school training was completed at the University of Nevada, Las Vegas School of Dental Medicine.

After dental school, Dr. Higbee completed his 2-year specialty training in Pediatric Dentistry at Hasbro Children’s Hospital and Saint Joseph’s Hospital for Specialty Care in Providence, Rhode Island, where he served as chief pediatric dental resident during the final year of his training. During his specialty training, Dr. Higbee enjoyed treating patients from all over the world and especially enjoyed working with patients with special health care needs including those with cleft lip and palate, autism, Down syndrome and many other conditions.

When Dr. Higbee is not in the dental clinic he enjoys spending time with his family, including his wife and 3 children. He loves the outdoors, being active in the community, and coaching youth sports. One interesting thing about Dr. Higbee is that he is fluent in speaking Spanish and enjoys using that special skill to better communicate with many of his patients who speak Spanish as their first language.

Font Resize
Contrast
Accessibility by WAH
Call Us Text Us